Barking up the wrong branch of the family tree 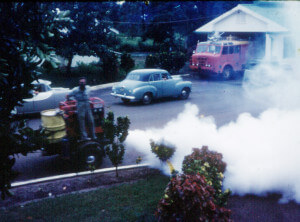 How did this happen?

In the good old days, summer meant lazy strolls to the ice cream shop, catching fireflies in jars, and chasing the DDT truck. Yup, when my husband grew up on Long Island in the 1960s, moms would holler to their kids “the truck is coming!” The neighborhood kids would clamber onto bicycles, racing to get closest to “the fog” as the DDT truck barreled along spraying insecticide throughout the town. What fun.

I hear you asking, “What could they have been thinking sending their kids to frolic in a fog of DDT?” Well, those parents believed DDT was harmless to humans. DDT was liberally sprayed in the air, on clothing, hair, pets, and food.

Meanwhile, on the other side of the country

At that time, in Alameda County, researchers were collecting blood samples from a group of mothers and over 9,000 daughters born to them between 1959 and 1967. All these decades later, scientists have examined those stored blood samples and their findings, published in the Journal of Clinical Endocrinology & Metabolism, are alarming.

The Washington Post explains that researchers measured DDT levels in the stored blood samples. By searching records and interviewing the daughters, “who are now in their late 40s and early 50s, they were able to figure out which ones developed breast cancer.”

The study’s lead scientist, Dr. Barbara Cohn, told NBC News, “it isn’t just simply that [DDT] changes the level of hormones, but it changes the tissue of the breast itself, the cells that eventually can be the source of cancer.” 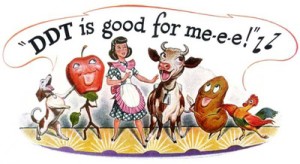 “Safe for humans” – until it wasn’t

The pesticide was used globally until the 1970s when it was banned in much of the world* due to concerns about its “toxic effects, its environmental persistence, and its concentration in the food supply.” DDT, and its degradation products DDE and DDD, are absorbed and stored in fatty tissue, particularly breast milk. They break down slowly and that persistence means that over forty years after the ban most of us have DDE in our bodies.

The new study supports classifying “DDT as an endocrine disruptor, a predictor of breast cancer, and a marker of high risk.” Like other endocrine disruptors these chemicals mimic or inhibit hormones; alter hormone synthesis or metabolism; modify hormone receptor levels; or a combination of these hormonal effects.

The Takeaway – act with caution every day but especially during pregnancy

My husband and his friends used to squeal with laughter as they chased those trucks; now they and their parents just shake their heads in dismay. It makes me wonder what we’re doing now, what we’re exposing our kids and ourselves to now, that will have us shaking our heads in the future. 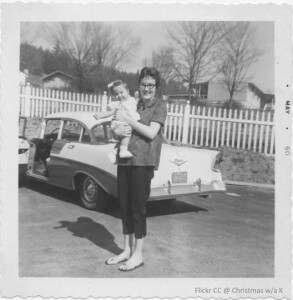 DDT is a halogenated pesticide. This study suggests that the adverse health effects of halogenated chemicals are sometimes only observed long after exposure. It’s why we should limit the use of such chemicals to applications that are truly necessary. As consumers, we can help by being thoughtful and cautious about the products we bring into our homes, and by demanding safer alternatives.

Finally, timing of exposure to harmful chemicals is key. Dr. Regina Santella of Columbia University told NBC News, “It’s really a combination of many things, what you’re exposed to, when you’re exposed, and your response to that exposure.” This study adds to the evidence that prenatal exposure is critically important.

For women born in the 50s and 60s who wonder if they fall into these higher risk groups Dr. Cohn says, “The best course is for each woman to discuss her personal history and potential risks with her doctor to determine what testing she might need, as for any other woman regardless of her DDT exposure.”

DDT is still used in parts of Asia, South America, and Africa where malaria kills over a million people a year. The World Health Organization supports some applications of DDT as a cheap and effective way to kill mosquitos that spread malaria. It’s use as part of the arsenal to fight malaria is controversial. Alternatives that are affordable, easy to use, effective, and proven safe for humans and wildlife are needed.